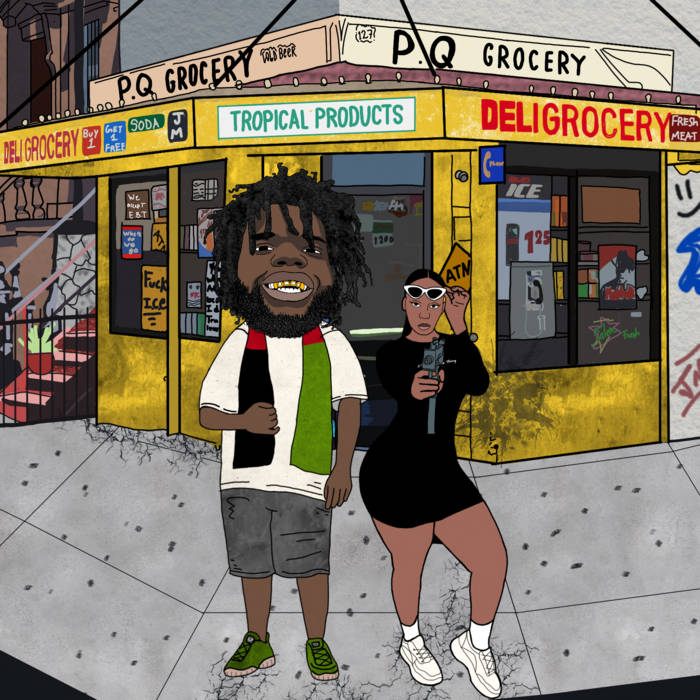 Everythingmaan Need this 🔥🔥🔥🔥🔥 on wax!

@unclesammc LORD JAH-MONTE OGBON is a good guy. Favorite track: 1,500 A VERSE AFTER THE VINYL.

ajd704ajd Jah-Monte spitting like crazy Favorite track: I DONT CHECK IN WITH NOBODY WHEN I GO OUT OF TOWN (GRAYMATTER).

Four projects deep into 2019, Lord Jah-Monte Ogbon hasn’t slowed his creative output in the slightest. Jewelry Rap, Alkaline Water and God Body & Soul each represented a different facet of the multi-talented Charlotte MC’s rap career, as Jah-Monte and his pen explored the soulful, the gritty, and the epic in equal measure. It’s expected at this point that each new project would feature either one producer tapping in for a singular, cohesive sound, or that multiple beatmakers would converge on a release of more ambitious scope. On Infinite Wisdom Jah-Monte is able to draw from both approaches, and the results are perhaps his best to date.

This project’s chosen collaborator is Sadhugold, an established producer from Pennsylvania that any fan of underground hip-hop at its most raw and genuine should know. The beat selection here is absolutely impeccable, they tremble and quiver under bloodthirsty Jah-Monte bars: ‘In the flesh my bitch lavishly dressed, no I don’t do no rap beef so you get stabbed in the neck’, ‘I got the world at my fingertips, duct tape bangers. I’m bout to make my bitch sex tape famous’. The brevity of songs like ‘Cocaine Powder’ only drive home the earthy, cracked textures of Sadhu’s beats, as Jah-Monte spits enough fire to fill an entire album of raps. Other songs are more fleshed out: ‘God In Him’ has the strongest potential to be a crowd favourite thanks to it’s incredible hook, but it also operates as a great piece of storytelling and a vicious tirade characteristic of the rapper’s music. ‘Gave n***** the pass, now I ain’t playing. My gun handle I wrapped in a rubber band’ is a lyrical takeaway from this joint.

As with all of his offerings so far this year, Infinite Wisdom keeps the guest appearances to a minimum. In fact, the only guests here are Fly Anakin and Big Kahuna, who both star on the breezy groove of ‘Most Notable’. The MC ensures that he remains centre stage however, as he opens the song with ‘My white hoe she real reserved like she voted for Bush’. Jah-Monte is always the most dynamic presence on songs he appears on, he’s just too full of life and energy to be anything but a jaw-dropping wordsmith every time he opens his mouth on a track.

The outside production that appears here is fantastic too, ohbliv contributes cheery loops and Graymatter shows out with a slinking, muted backdrop for Jah-Monte’s fiery performance to scorch. Infinite Wisdom not only features some of the rapper’s most memorable performances to date alongside his usual penchant for dark, incredibly witty lyrical topics, but it sees him elevate into a new space solely reserved for rappers that have totally, unequivocally conquered their chosen field. It’s likely that this project will go on to be Jah-Monte’s strongest, and that’s a significant achievement when examining the rest of his discography.

Bandcamp Daily  your guide to the world of Bandcamp